CANVASES IN THE GOLDEN GALLERY

Together with the Renaissance grisailles in the Oratory, the canvases on the ceilings of the Golden Gallery are the only original paintings commissioned by the Borgia Dukes and Duchesses at the Palace.

Due to their dimensions (the first three are 10x5m and the other two 5x5m), and to their complexity, this pictorial series is a milestone of the late Baroque period. Tradition has maintained the painter Gaspar de la Huerta as the author of these works, although recent studies point to a possible collaboration with Esteve Romaguera in completing some of them. 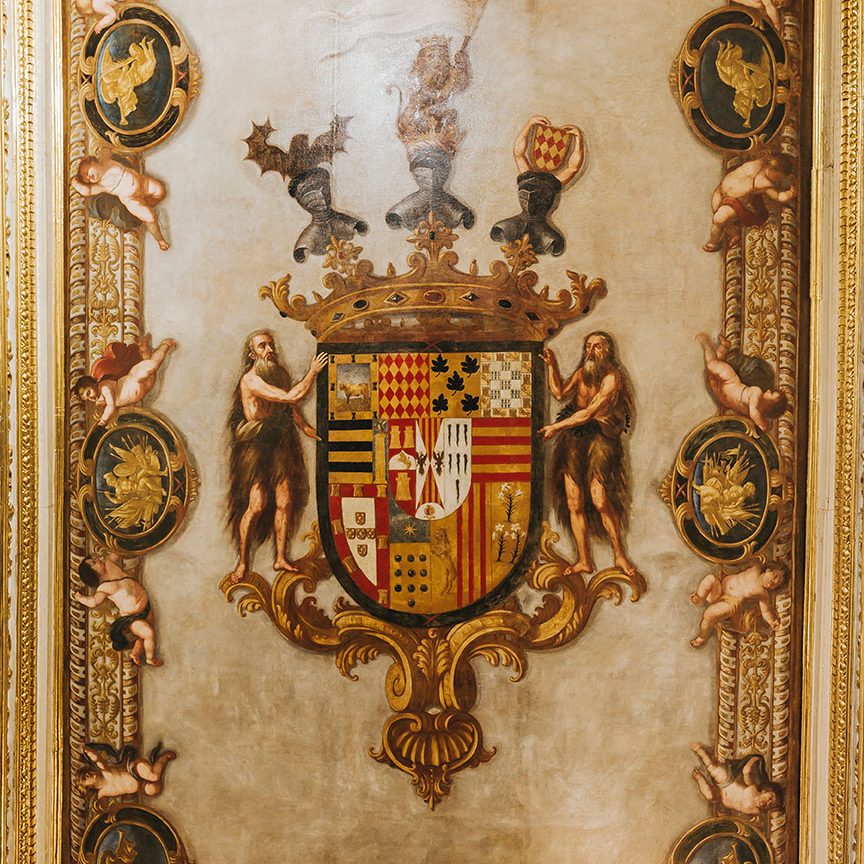 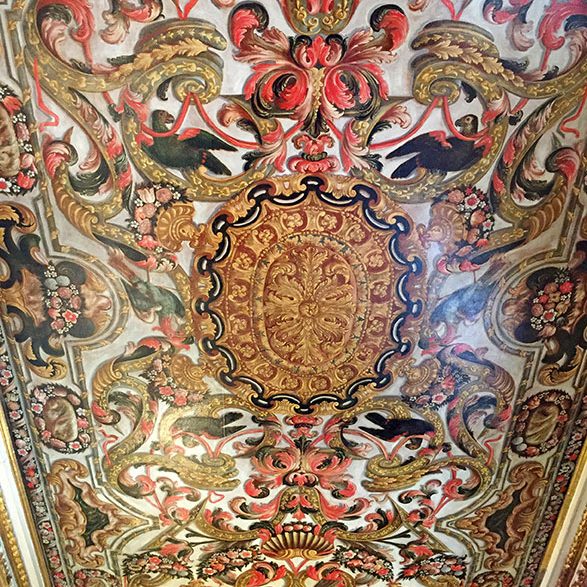 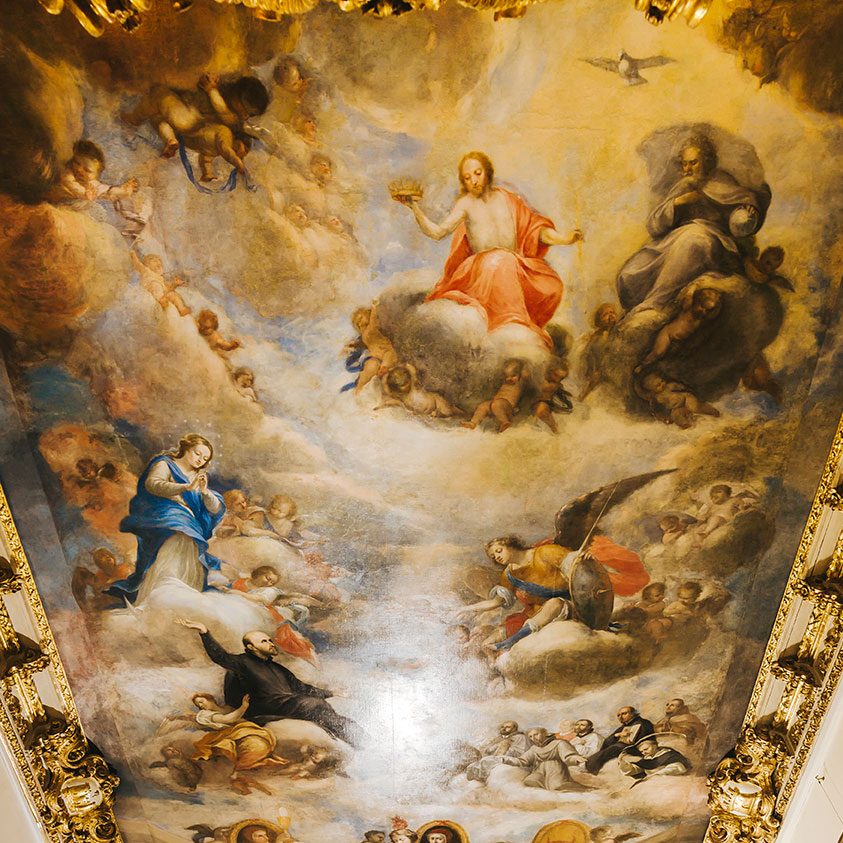 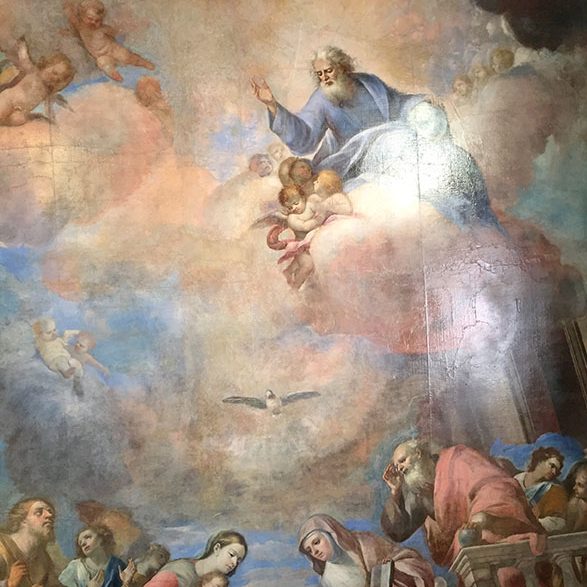 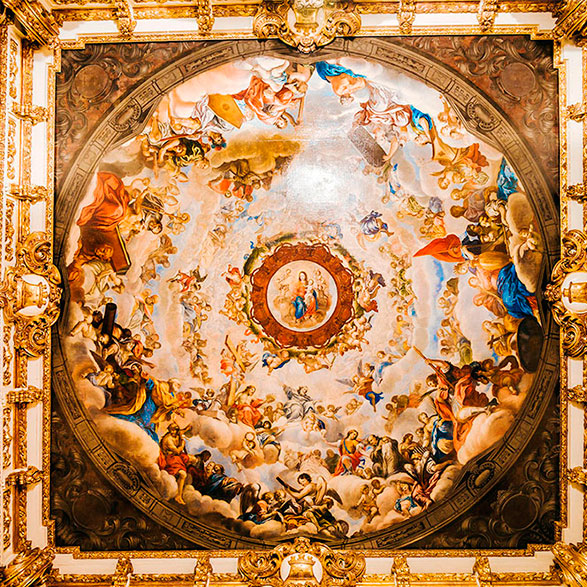 This is the most complete genealogical coat of arms of the Ducal family shown in the Palace, similar to the one in the Arms Courtyard. The emblems of the coat of arms of Alexander VI – the red bull (Borja) and the yellow and black bands (Oms) – are combined with the heraldic devices of the women who married with the Borgia Dukes of Gandia for over 200 years.

Among these, we can see the shields of the Enriquez, the Castros of Portugal and the Centelles. To these representations we only need to add the coat of arms of the Benavides of Aragon, a family related to the Borgias by the marriage of the 11th Duke, Ignacio Francis Borja with Rosalea Bernarda de Benavides y Aragón.

The coat of arms is held by two bearded supporters or attendants who represent no specific allegory, but are merely present to give prestige to the Borja lineage, with figures used since time immemorial.

It is crested with three half-open visored helmets, a symbol of the Christian knights who fought against the banner of the Crescent Moon. Over the helms there are three other elements: to the dexter (the bearer’s right), is the Rat-Penat, or Bat symbol of Valencia; in the centre, the Ducal Crown with a seated lion holding a flag unfolded; and to the sinister (the bearer’s left) the shield of the town of Oliva, supported by two bare arms. 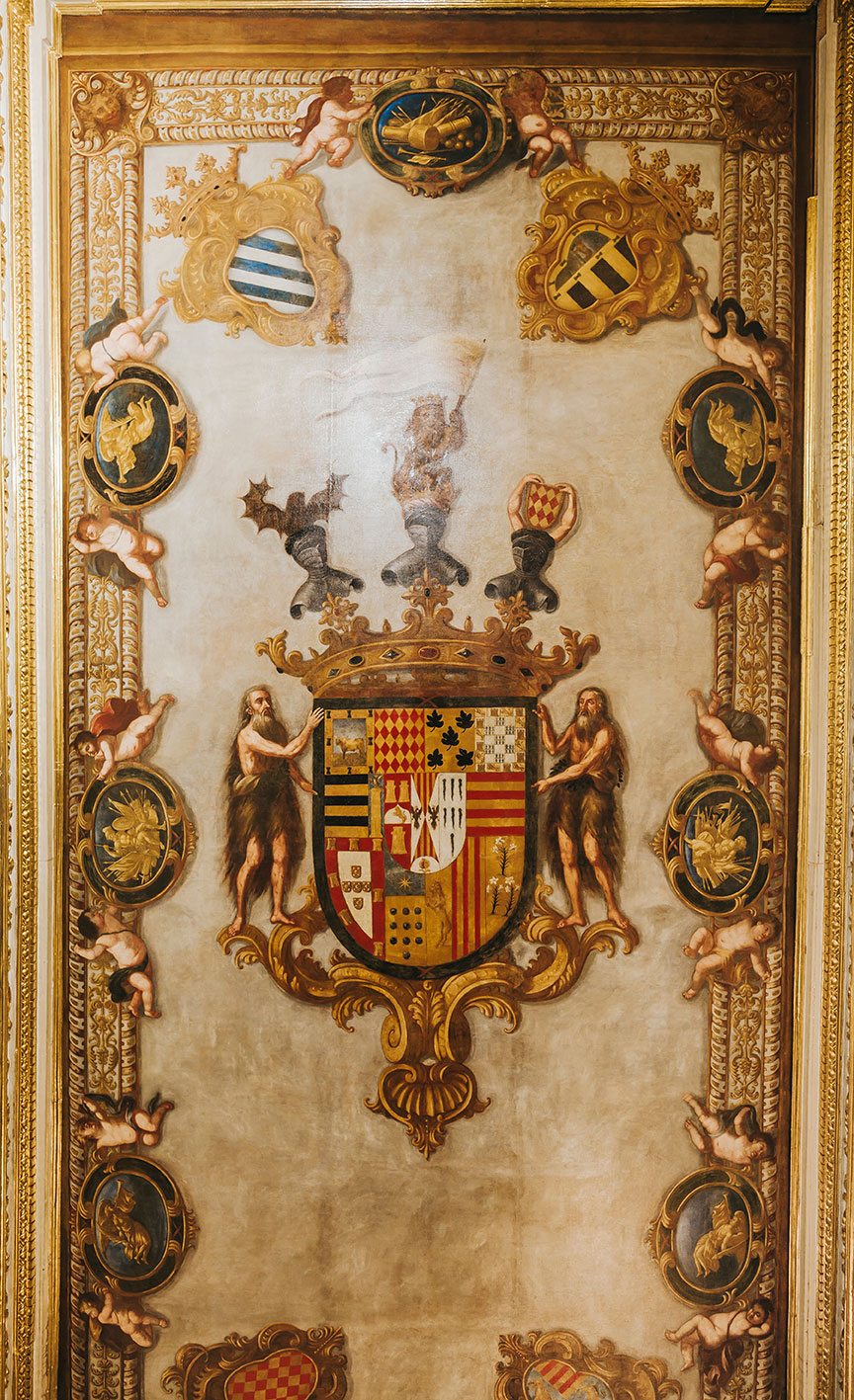 In the second section of the Golden Gallery there is a ceiling tapestry imitating the famous fabrics of the French “Savonnerie” manufactory.

In the first two rooms, religious images were not chosen for the iconographic programme of these canvases because they were used more for entertainment and festivities. Nevertheless, the pictorial discourse is totally religious in the last three rooms, because they were not used for festive acts, but rather reserved for honouring the figure of the newly canonised Saint Borja. 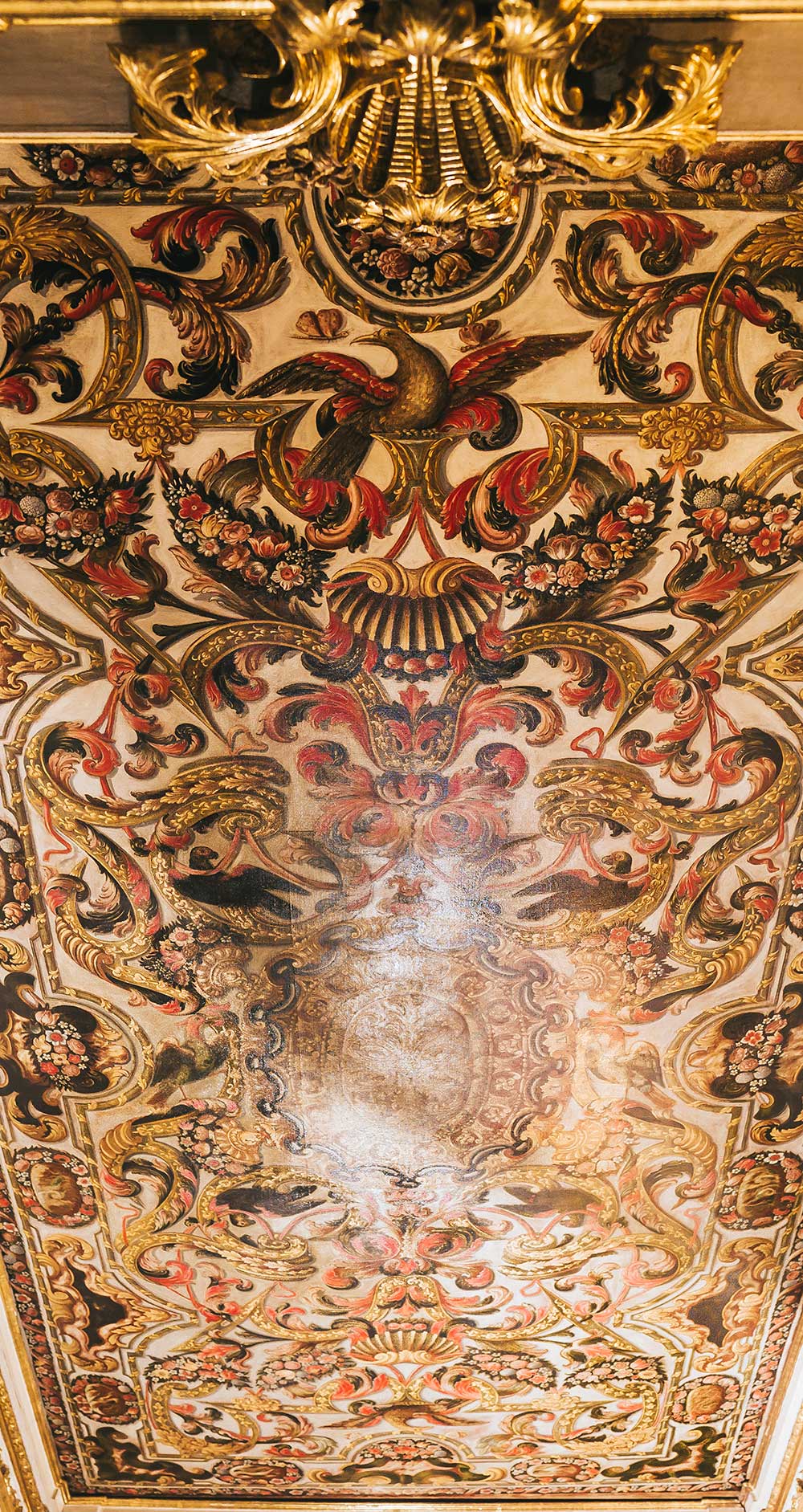 In the central room we find the most significant painting of the whole series. This canvas shows how the canonisation of Saint Francis Borja was debated and decided. In the lower section we can see the papal conclave, or meeting of the College of Cardinals, in front of a woman crowned with a papal mitre and the keys of St. Peter in her hand, allegorising the Church. Above the ecclesiastical members we can see two angels bearing the Saint’s symbols, the three red cardinal galeros or hats, and a crowned skull.

Above, in the celestial plane, are the three theological virtues, Faith, Charity and Hope, holding three medallions with the portraits of Calixtus III, Alexander VI and the red bull, the emblem of the Borjas.

In the upper section, we can see Francis Borja on a cloud dressed in his Jesuit habit next to a series of highly recognisable saints and beatified persons acting as witnesses to the glorification, and above him, Saint Michael the Archangel, the Immaculate Conception and the Holy Trinity. 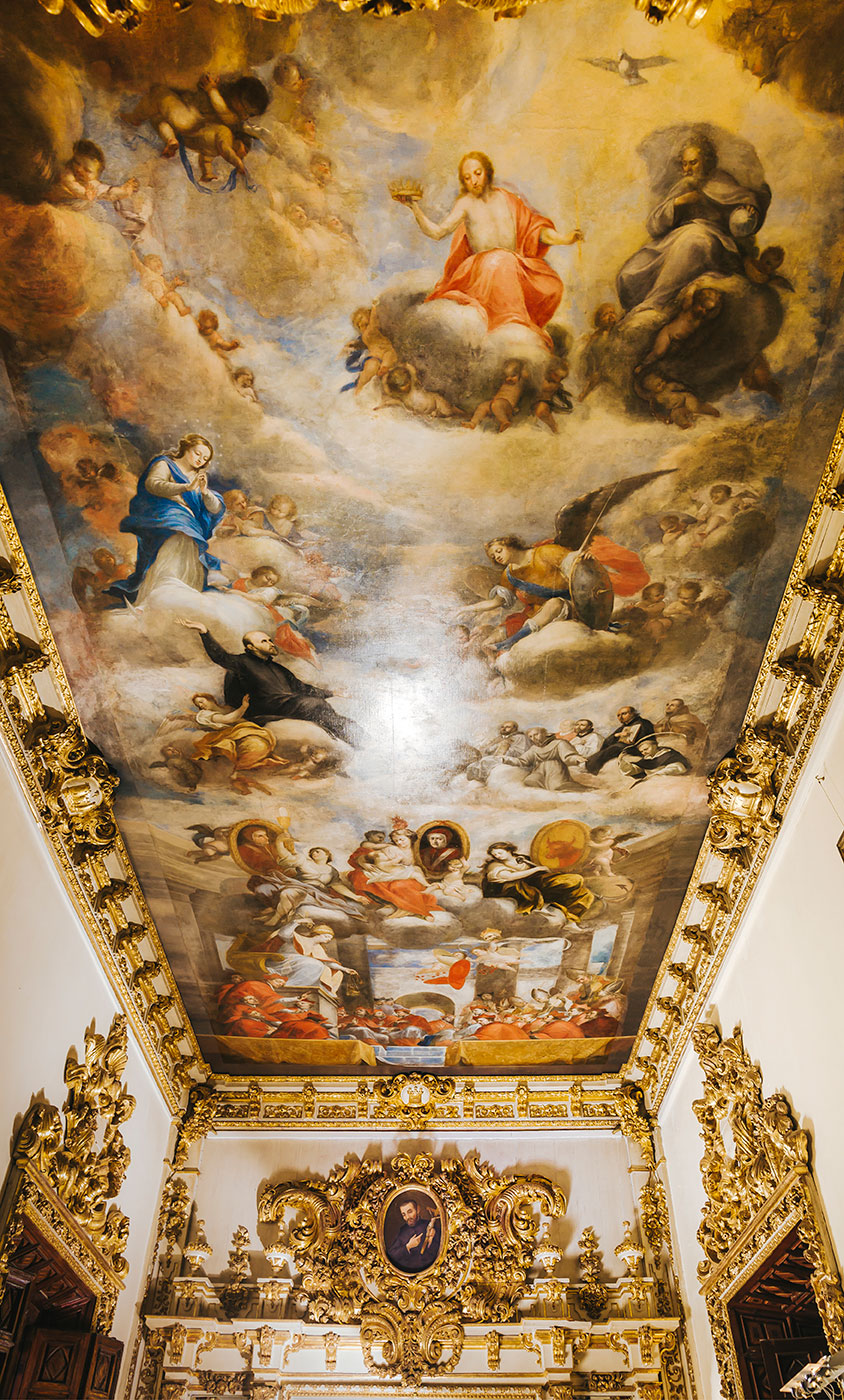 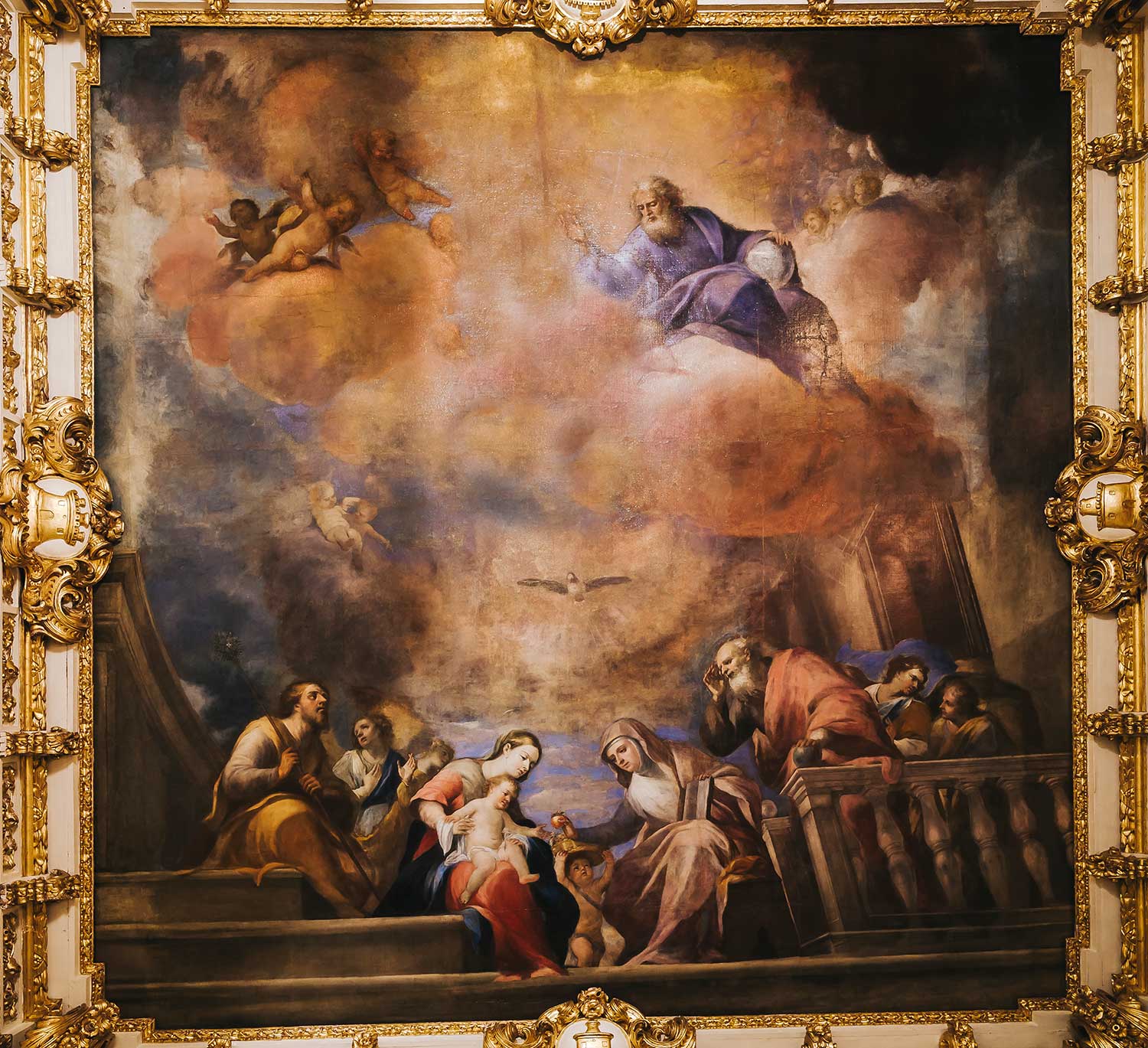 This final canvas is a representation of a celestial dome in which the figures of prophets, angels and saints are organised in concentric circles, framing the image of Our Lady of the Rosary in the centre. This celestial vault again shows how Saint Michael the Archangel presents Saint Francis Borja before the Temple of Grace, where the Father welcomes him, and the Son delivers the crown of glory to him. 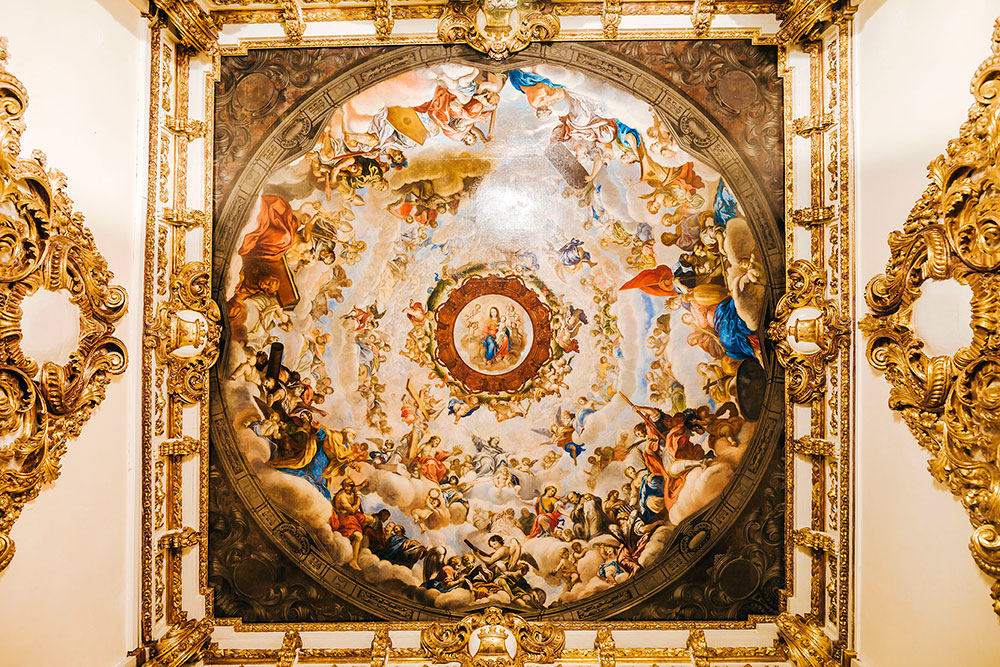 CLOTH PAINTINGS IN THE CROWN HALL >