Of all the artistic elements viewable in the building today, the most noteworthy are the ceramics, with pieces ranging from the 14th to the 20th century.
Even in the early beginnings of construction, ceramics were used as decorative elements for floors and wall friezes. One of the oldest examples found here are the “alfardons” ceramics, in Sala de la Torrecilla, or Little Tower Room. These are tiles of Islamic origin with elongated hexagonal shapes in blue and white.

Pieces from the 15th and 16th C have now been relocated to other rooms. Only some of the floor tiles have remained in their original places, such as those in the Duchess’s Chamber and the floor of the room adjacent to the Neogothic Chapel, and part of the upper frieze of the Crown Hall. Most of these tiles are in the chromatic design of “alfardons” ceramics, but now in their later square shape, and the Mudejar-style tiles of the Crown Hall.

The Baroque ceramics are the best preserved, such as the “mocaoret” tiles in white and green (Hall of the States of Sardinia, Green Room, Tower Room). This period includes green and yellow colours and plant motifs. There are various examples of these at different points (Honour Staircase, Green Room), but especially in the Golden Gallery. 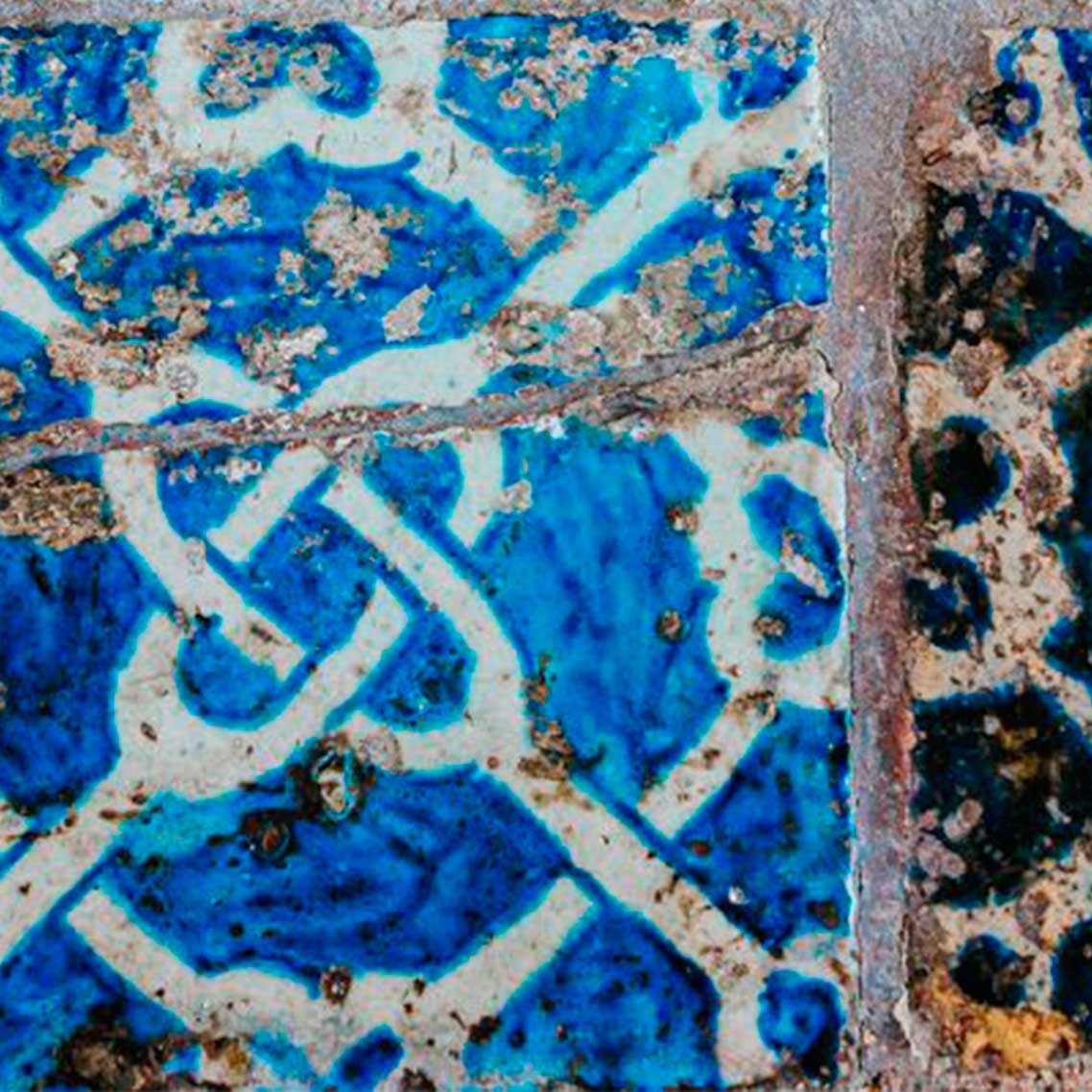 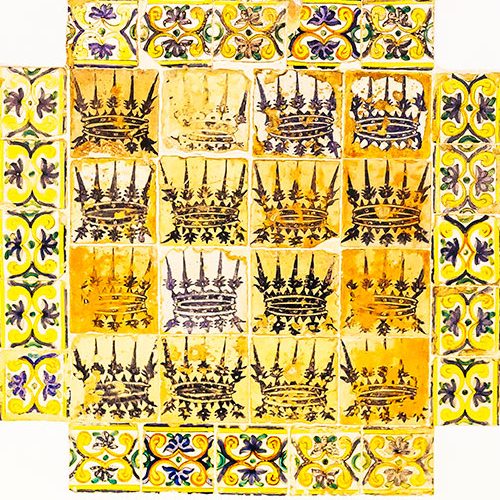 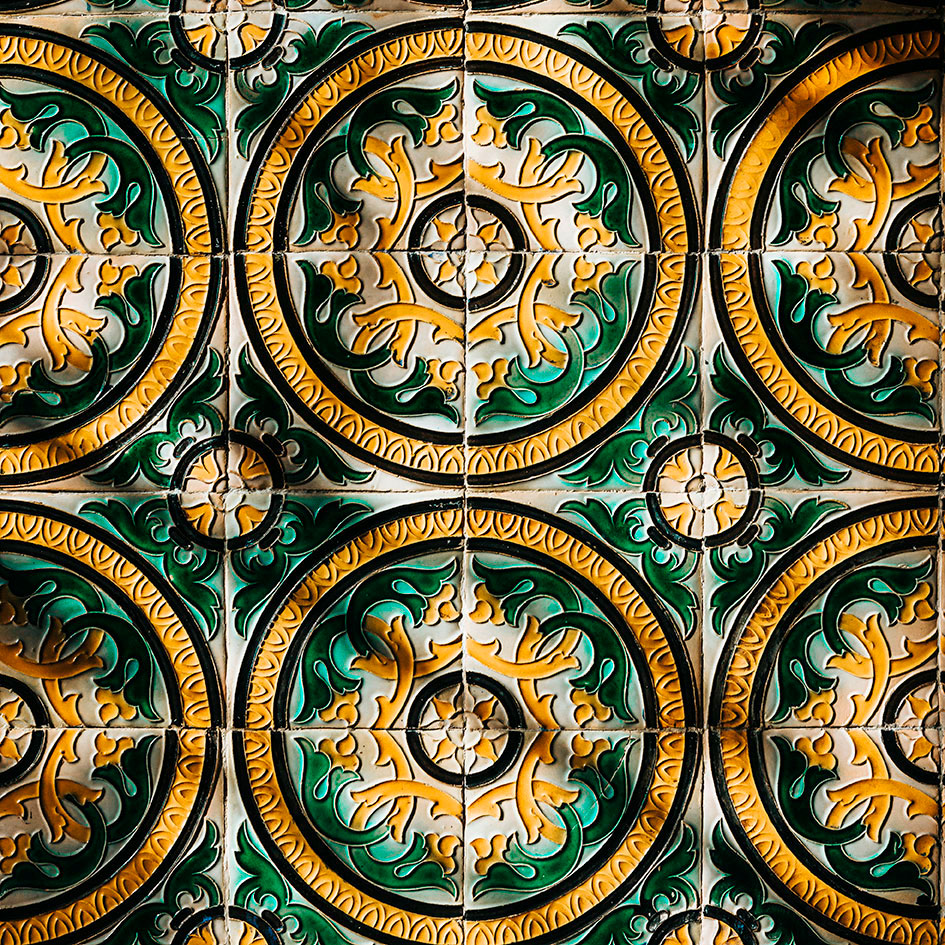 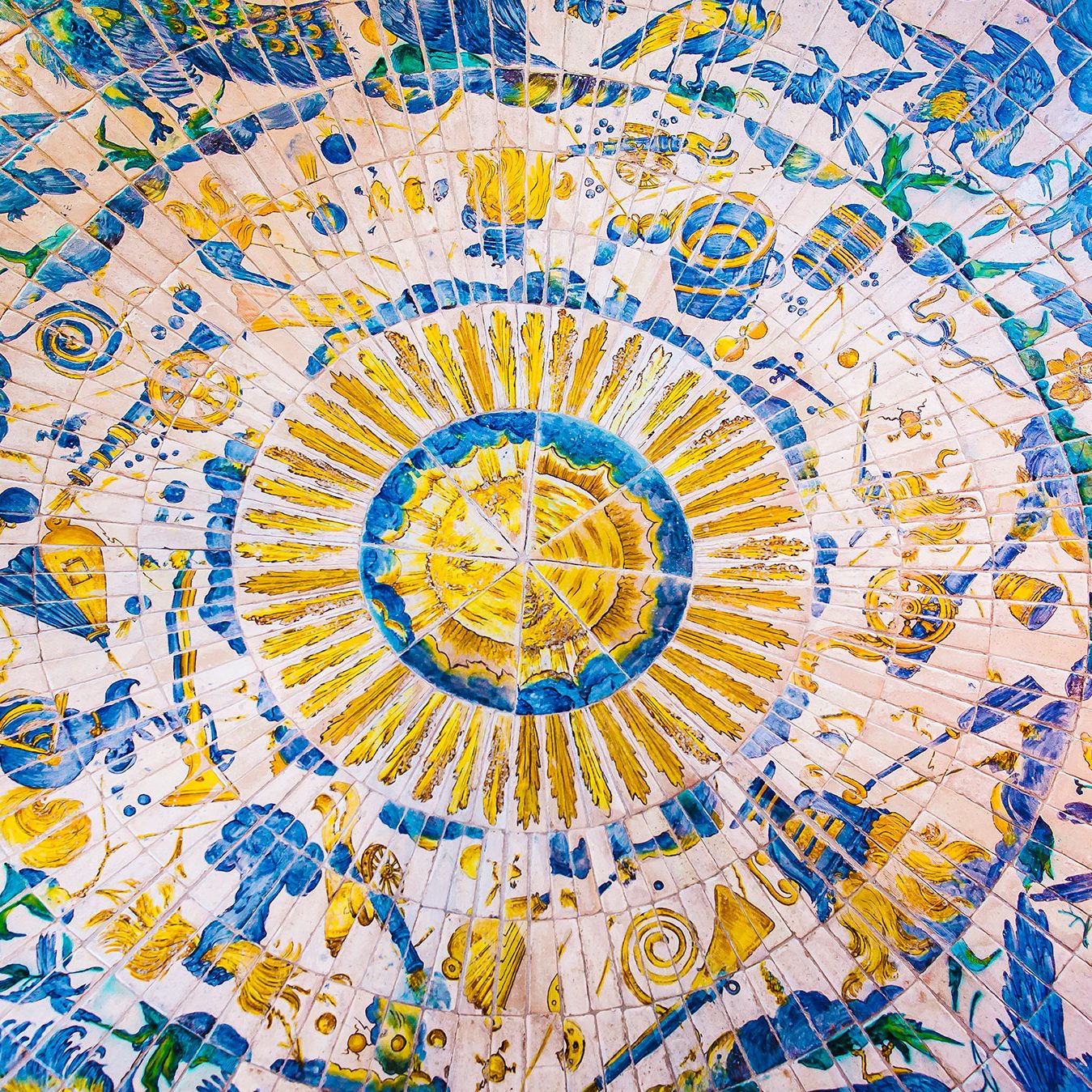 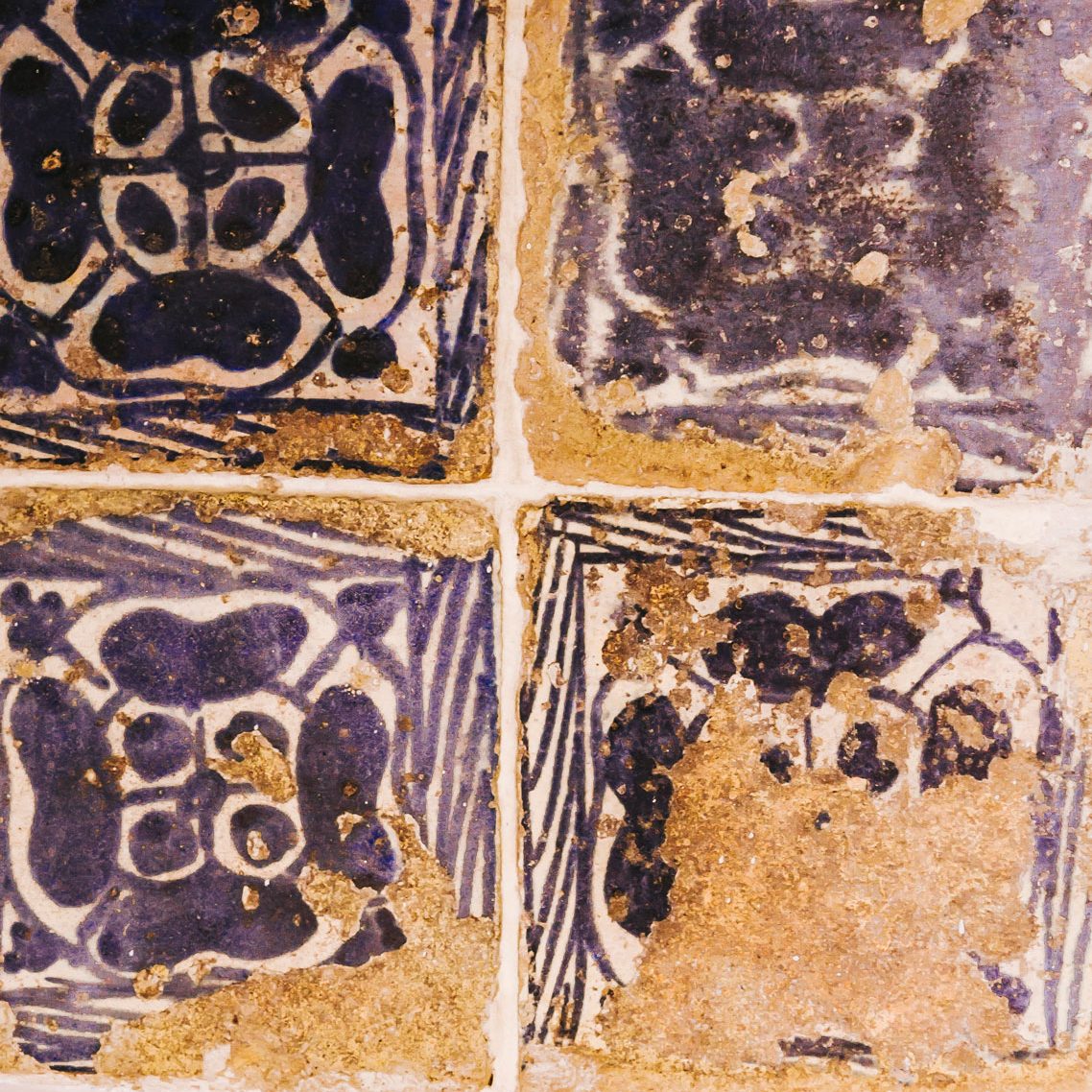 The only example of 14th-C ceramics that can be found in its original place in the building today is on the floor of this room. Known as “alfardó” ceramics made in Manises, their main decorative motif is vegetation in the Gothic tradition, in cobalt blue on a white tin background.

There is a set designed with three different types of tiles, with a square centre tile generating an octagonal composition framed by its adjacent tessellations. These ceramic pieces are of Arabic origin, and were used in many buildings initially linked to the Crown of Aragon, hence their presence in the Ducal Palace of the city. 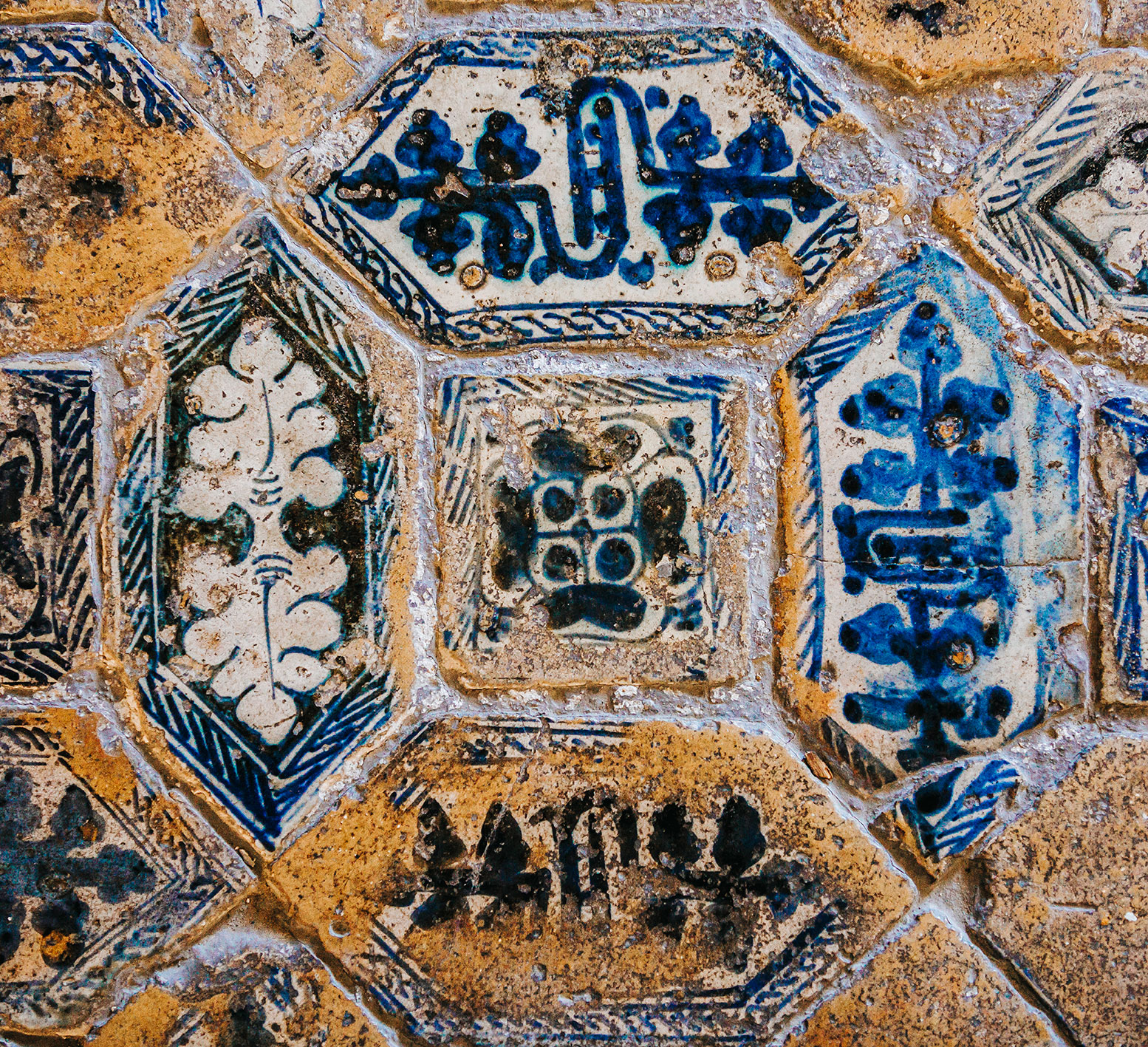 Relocated today to the Ceramics Gallery, there are two compositions with 15th-C blue and white tiles depicting the papal emblems, double crown and barbs, which the whole Borja family shared as from 1492. This was probably a small sample of what must have been a larger batch of tiles produced in 1494 in the city of Gandia itself and in Manises on behalf of Pope Alexander VI for his son Juan, the 2nd Duke.

This papal commission was intended for tiling the floors of the Borja Rooms of the Castle of Sant Angello and the Borgian Apartments in Rome. According to the ceramics historian Manuel González Martí, who was able to verify the authenticity of the Borgian tiles in the Italian capital, the quality of the Gandia production was inferior to that of Manises both artistically and technically. 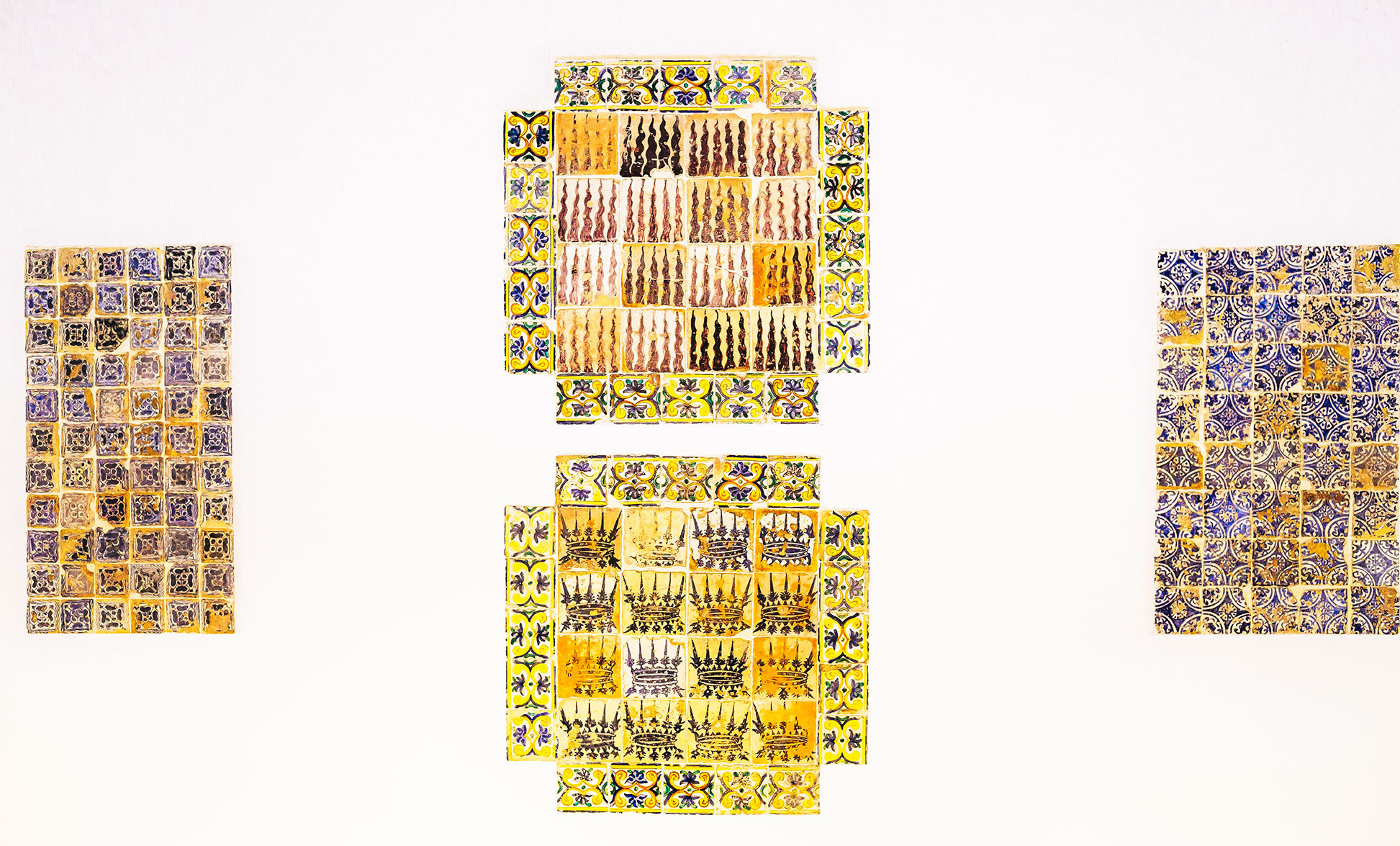 In the Palatial Audience Room  we find one of the best preserved examples and, possibly, the most peculiar, corresponding to 16th-century ceramics. This is the lower wall plinth surrounding the entire room with ceramic pieces following the fashion of the day, the Mudejar style, breaking away from the traditional Valencian tile in cobalt blue and white.

The “arista” ceramics viewable in this room are decorated with a predominance of Mudejar interlacings in green and yellow. In this case, the original tiles of the wall overlooking the courtyard have been preserved, and the tiles on the lintels of all windows. The other half of the room today presents ceramics from the 20th century, but made following the technique and decorative motifs of the originals. In addition, this reconstruction of damaged sections was commissioned to an old factory specialising in metallic reflection tiles, which disappeared at in the early 1990s, La Ceramo de Valencia. 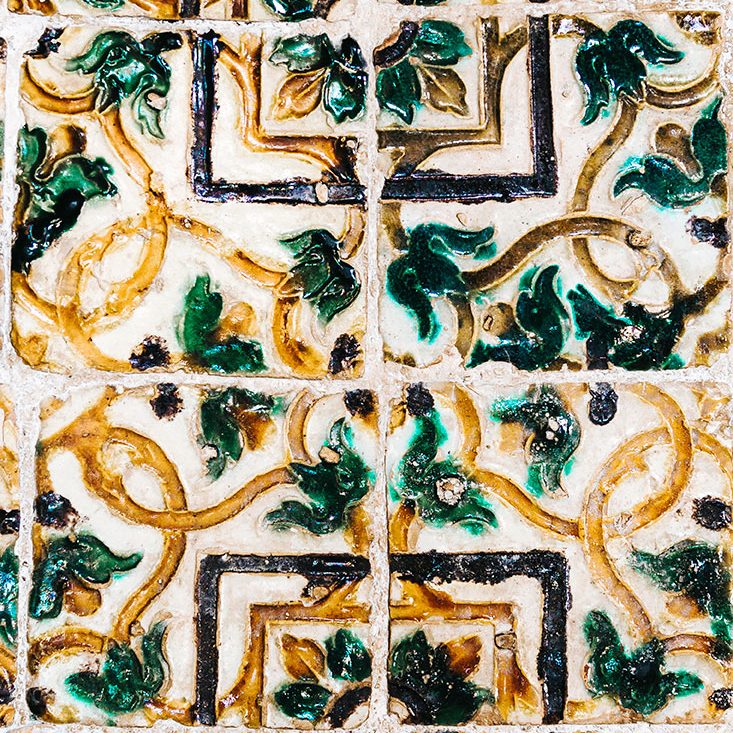 The Floor of the 4 Elements in the Heaven and Earth Hall of the Golden Gallery  is considered one of the finest examples of Valencian Baroque ceramics.

The design is attributed to Dionís Vidal, and it includes over 1500 pieces in different sizes and shapes distributed in four concentric circles. The first circle, closest to the Sun, corresponds to Fire, with the successive circles of Air, Water and Earth, respectively, from inside to out. On angle there are four symbolic mascarons corresponding to each element, set between the border surrounding the tiles and the central circle. This is a fantastic rhetorical-visual diagram of the Aristotelian concept of the Earth. 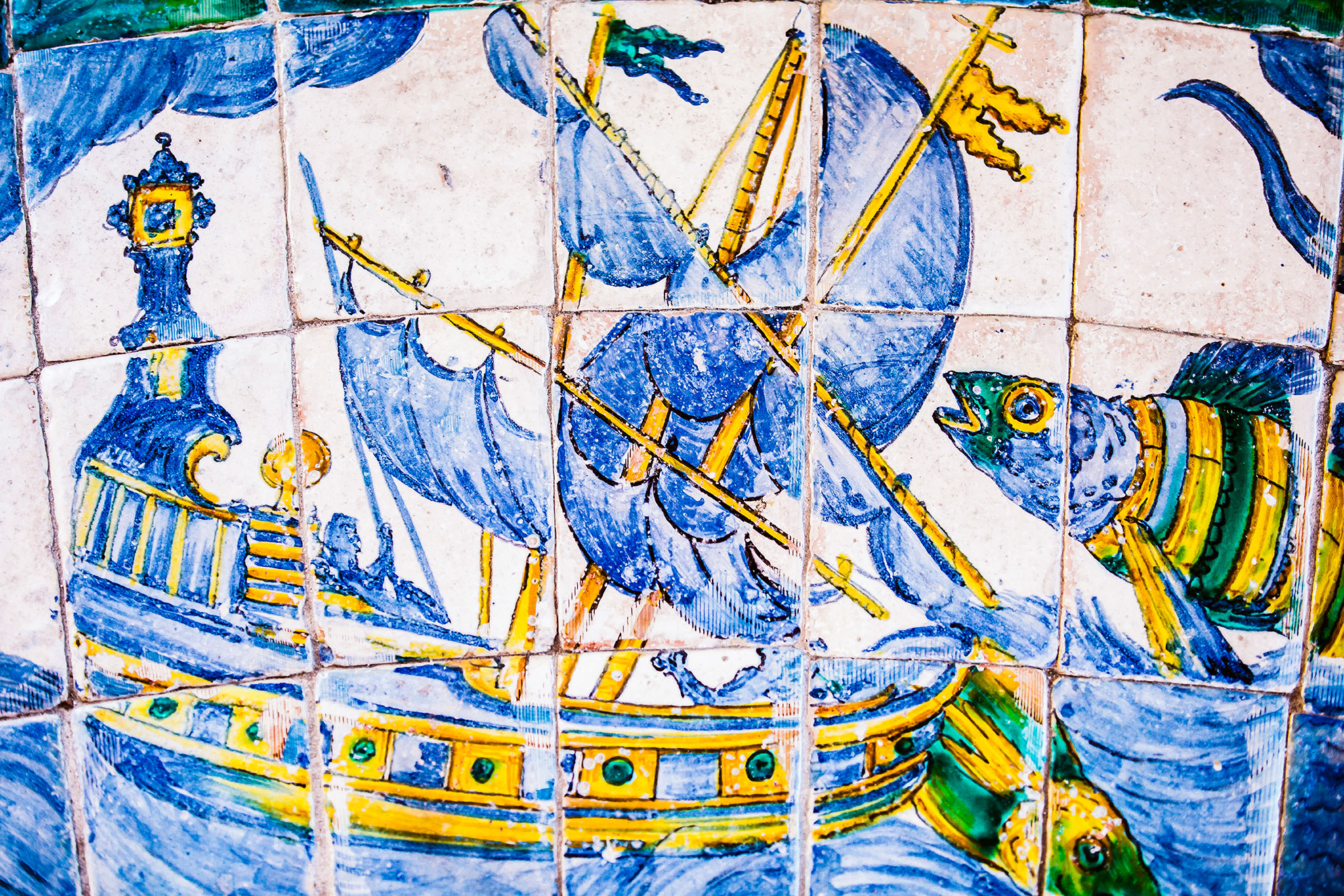