CLOTH PAINTINGS IN THE CROWN HALL

The collection of cloth paintings in the Crown Hall of the Palau Ducal dels Borja de Gandia forms a series set of eight large-format paintings, known as a history painting: a visual way of narrating the historical events in the life of Francisco de Borja through memory. In other words, a “modern” way of interpreting the past. This series of paintings describe different episodes of Francisco de Borja’s biography in a clockwise direction, adapting to the spaces between pillars, windows and walls.

They were made by the painter and Jesuit brother Martín Coronas (1862-1928). They follow the romantic trend of the late nineteenth century that seeks to emulate the techniques of the past, specifically the Middle Ages.

They imitate the tapestry technique with various resources, including the textures of its execution and the exhibition hanging without a frame. We find them named and cataloged as tapestry, false tapestries, oil on tapestry, oil on canvas, tempera and oil on canvas. They are actually paintings on cellulosic fiber supports of different natures, similar to sackcloth.

The collection.
Following the chronological order of events we can see: 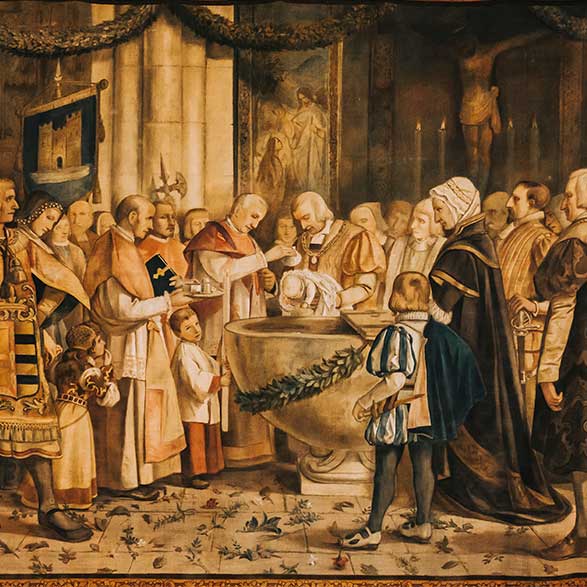 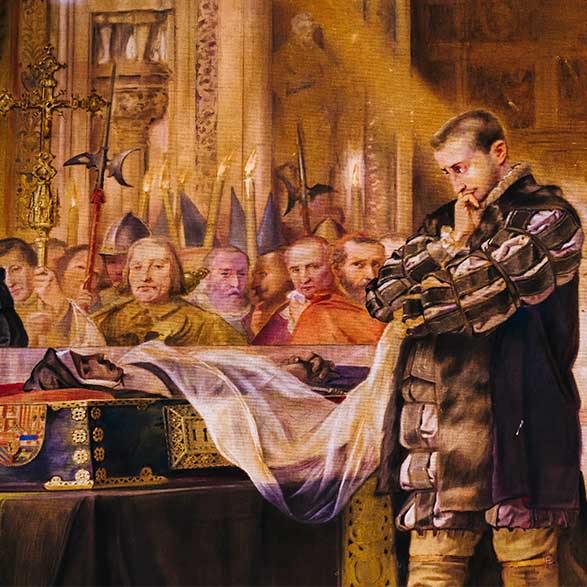 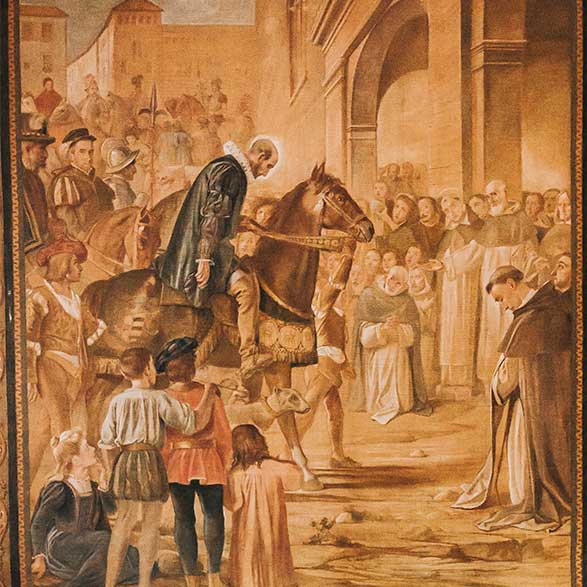 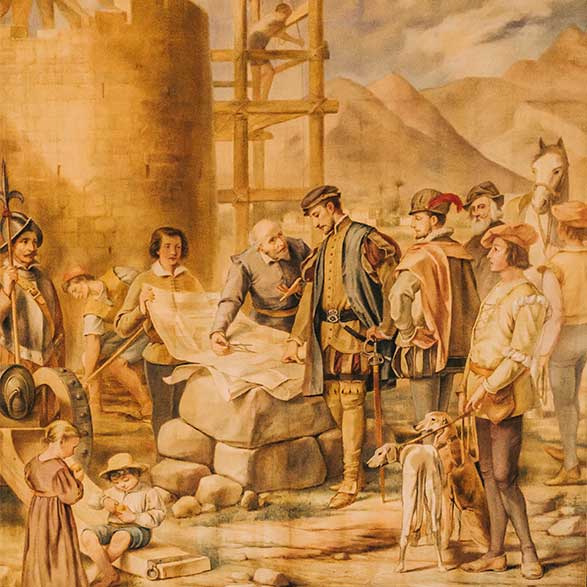 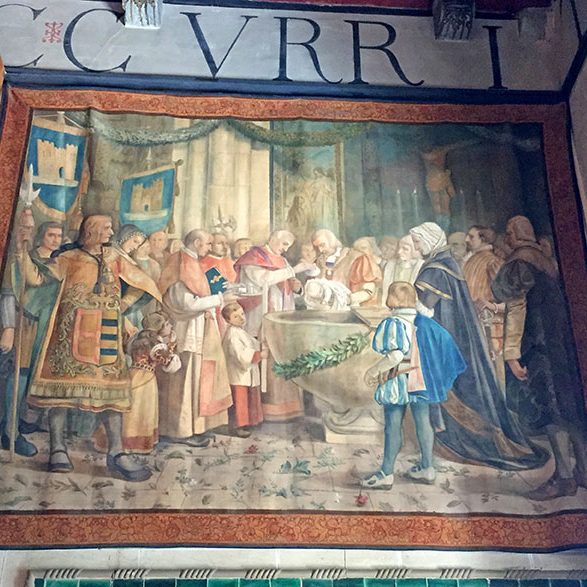 The first scene presents the Baptism of Francis Borja in the Collegiate Church of Gandia (300x338cm, 1898). This cloth painting is located above the entrance door to the Neogothic Chapel.

The scene shows the baptism of Francis Borja in the presence of the ducal family and next to an entourage with a halberdier guard and the city banner-bearers. The painter’s intention is to demonstrate the Gandian origin of the anointed child and his connection to the city which he will later govern as Duke. 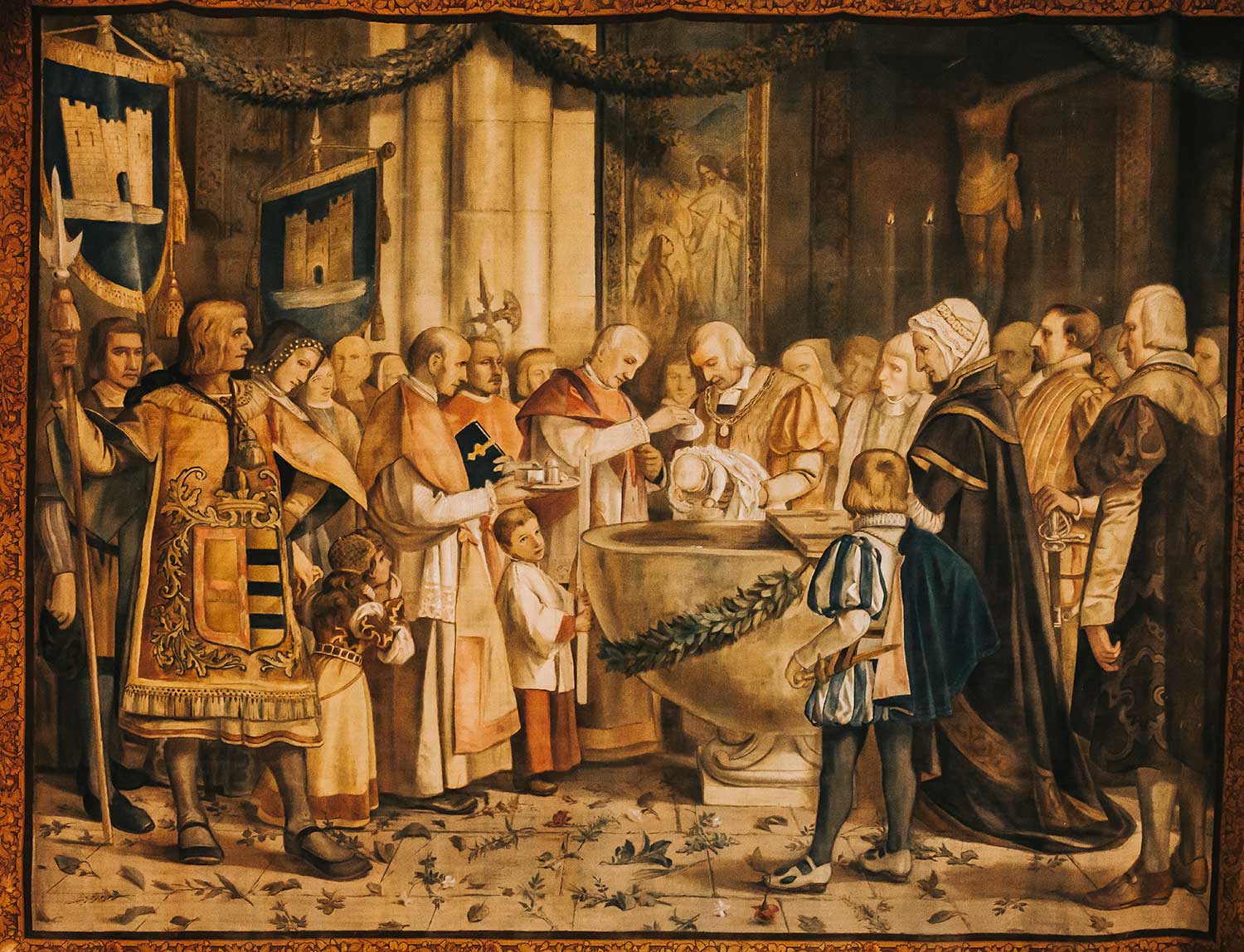 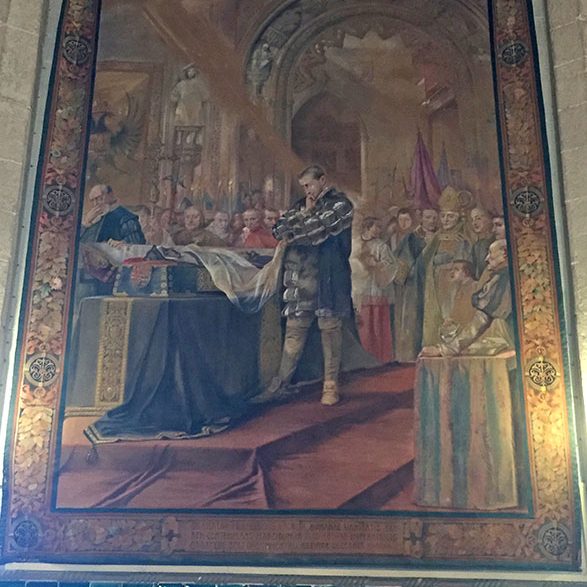 This painting shows Francis Borja in the Royal Chapel of Granada, in a meditative pose before the Empress’s corpse, in the presence of Archbishop Gaspar de Ávalos, the Chapter and other nobles.

This is one of the most frequently pictured scenes in the Saint’s life, and according to tradition, it was intimately linked to his conversion. 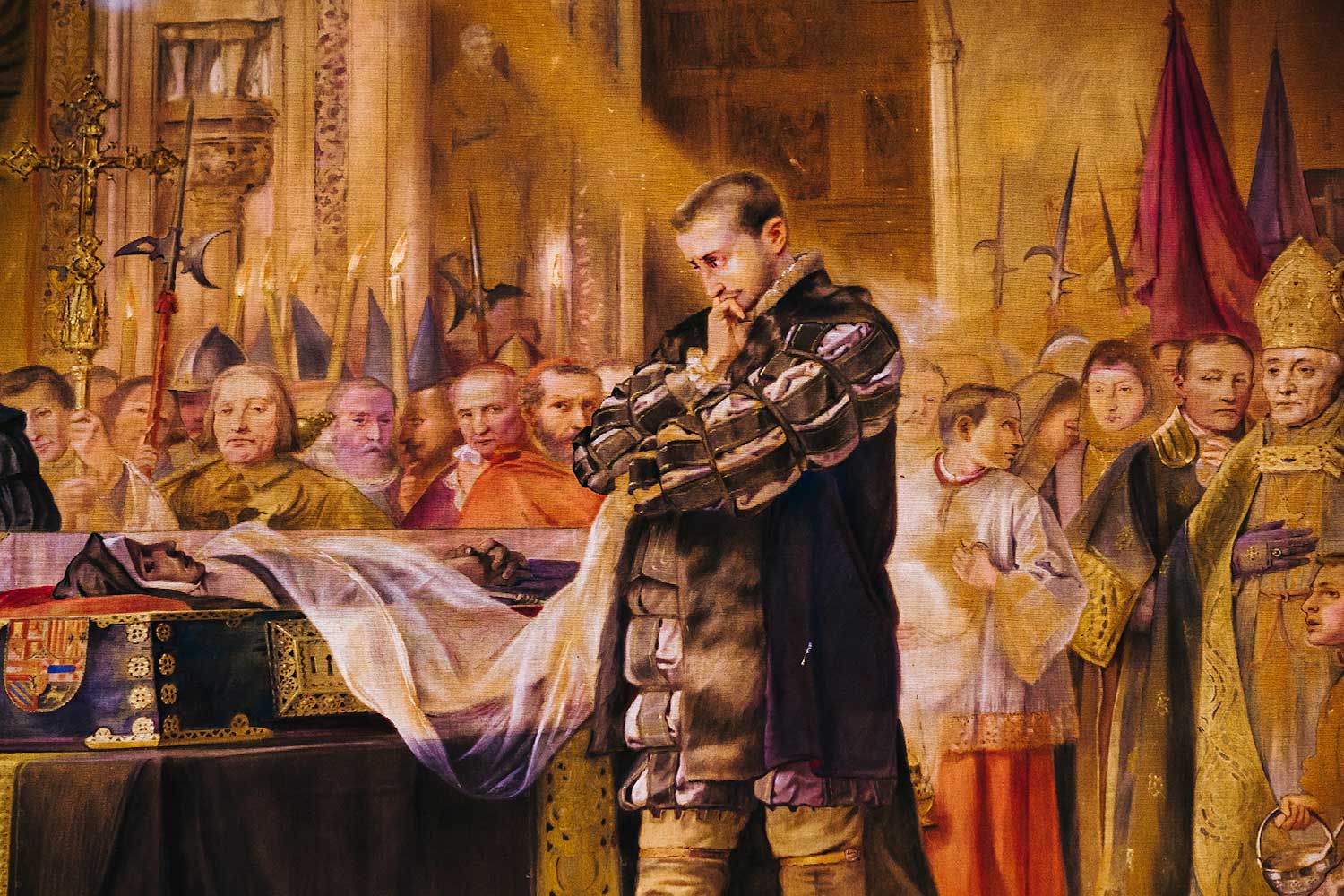 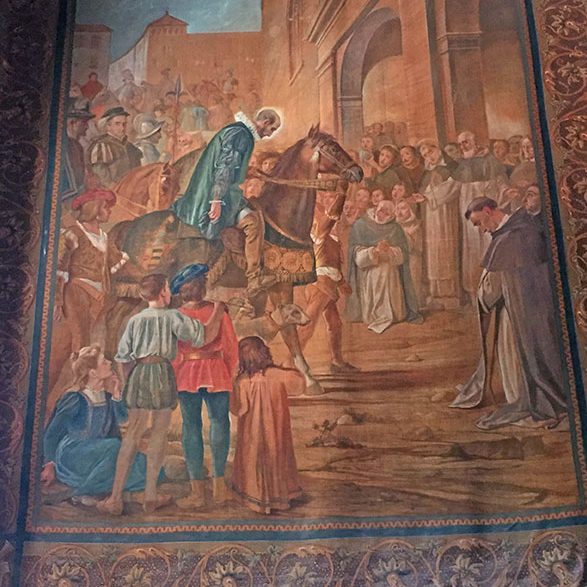 Francis Borja, as the first Marquis of Llombai, founded the Dominican Convent in this town. In this scene the Marquis is being welcomed by the community upon his arrival on horseback. 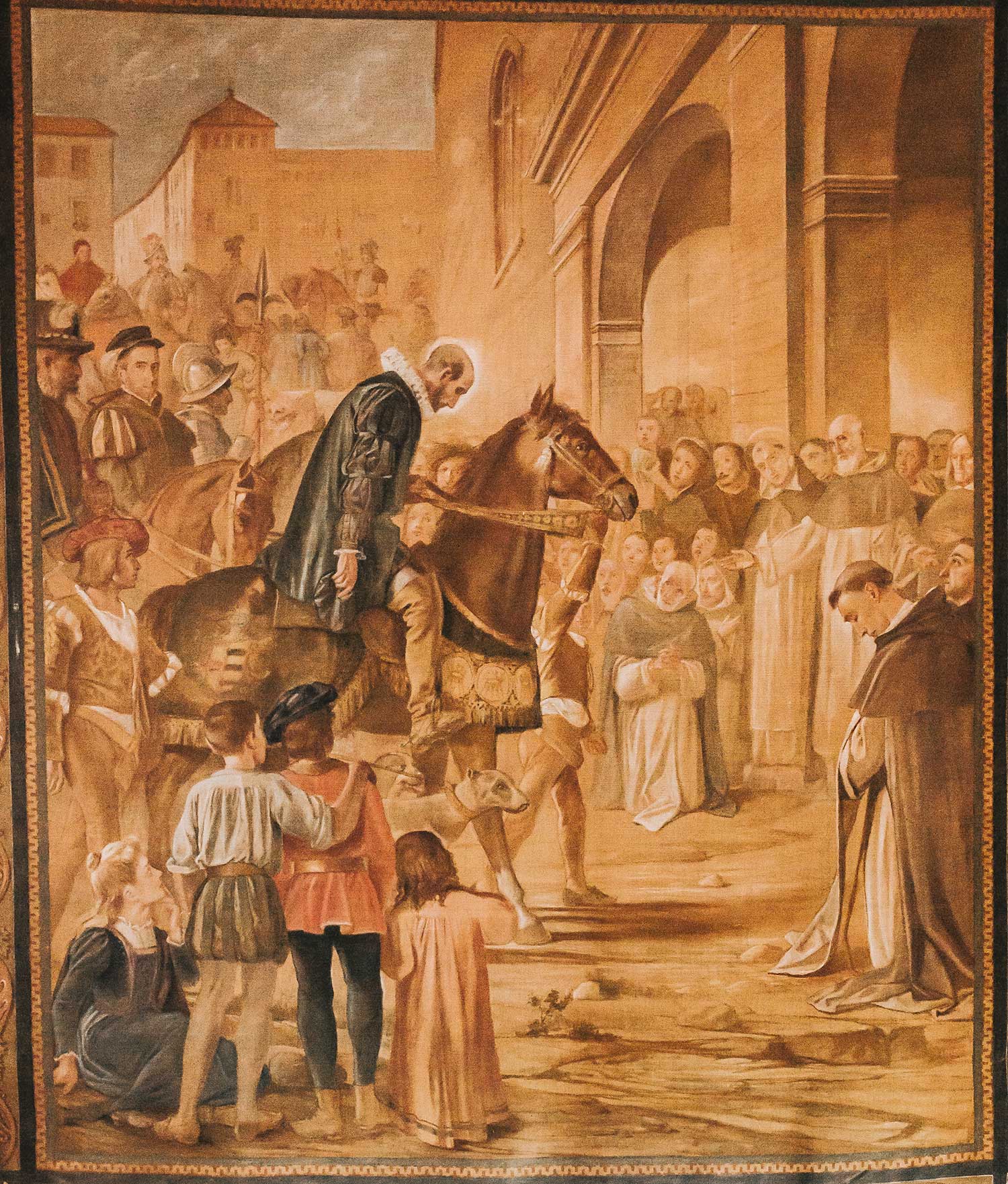 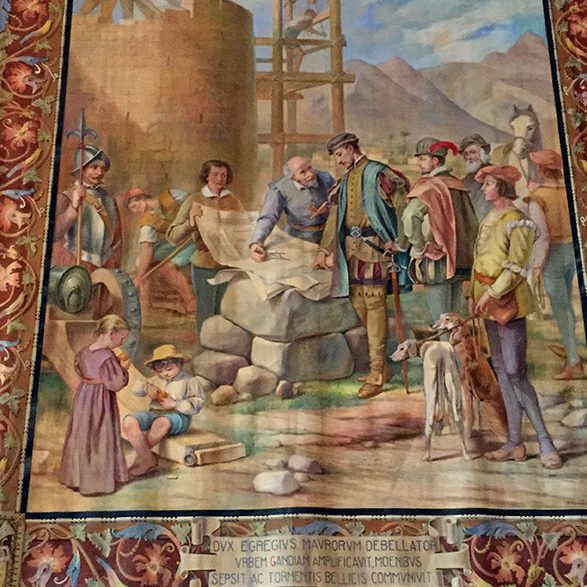 The Duke, who seems to be out on a hunting expedition, has dismounted from his horse and converses with the master of works as to how the new 16th-C layout of the city walls is progressing.

The painting focuses on the construction of a wall tower, with a fairly real depiction of the Montdúver mountain range in the background. 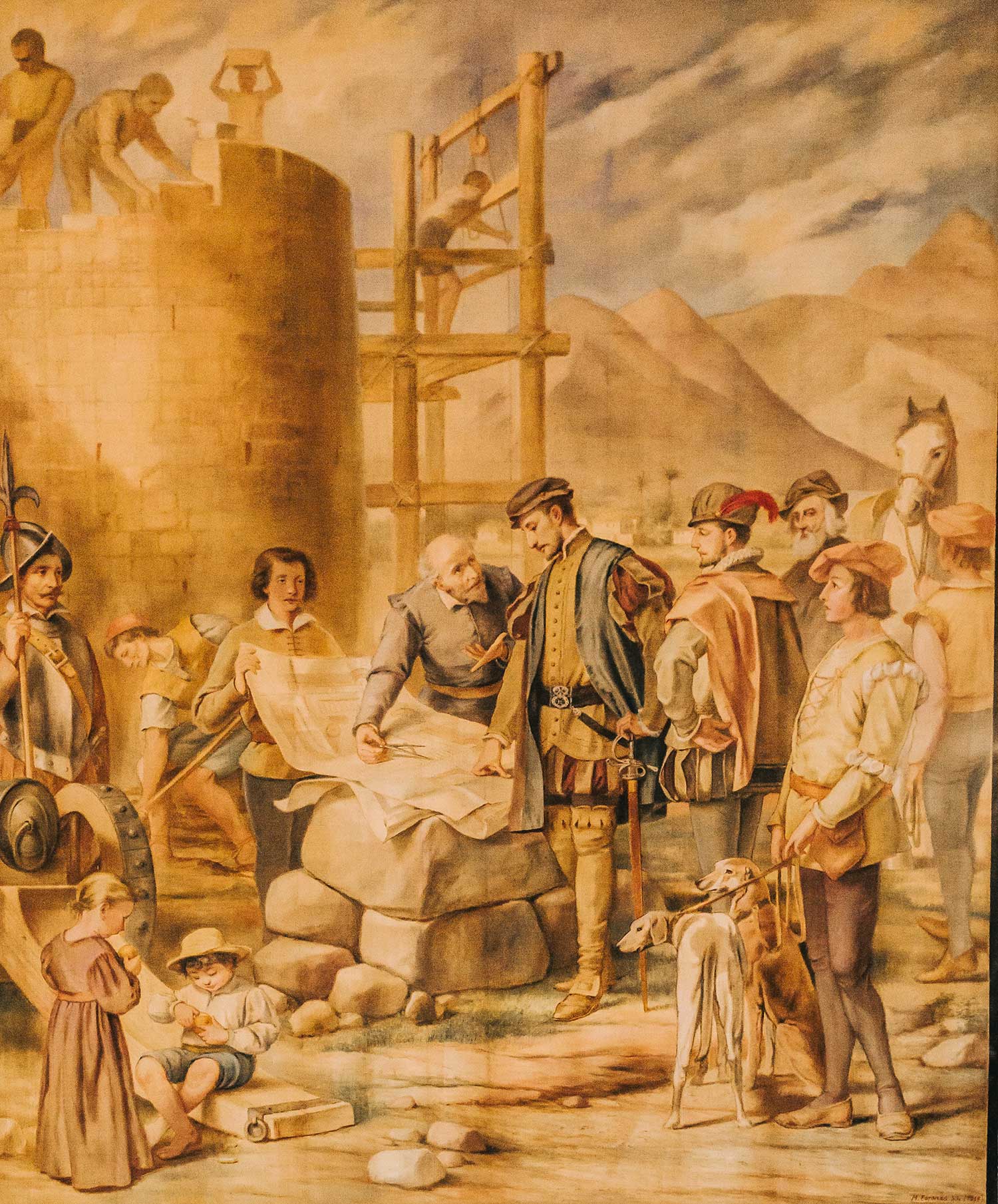 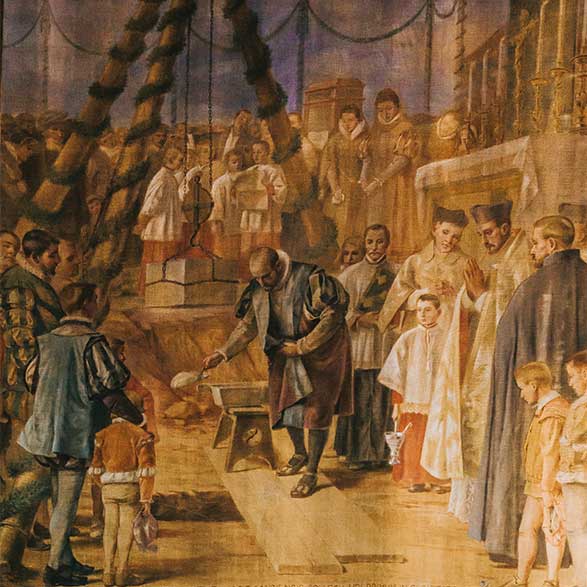 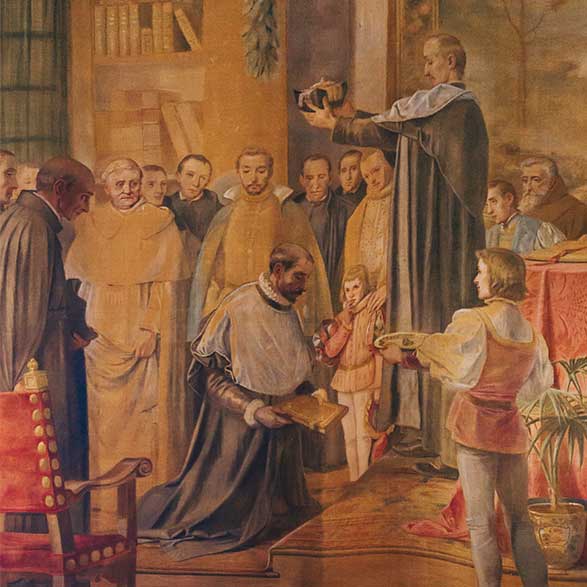 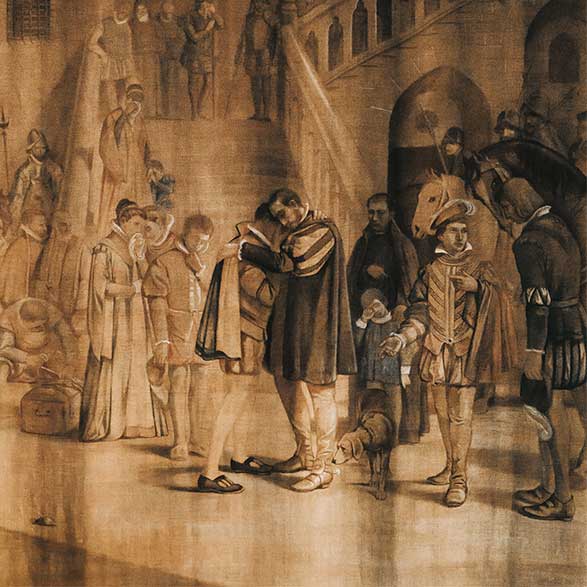 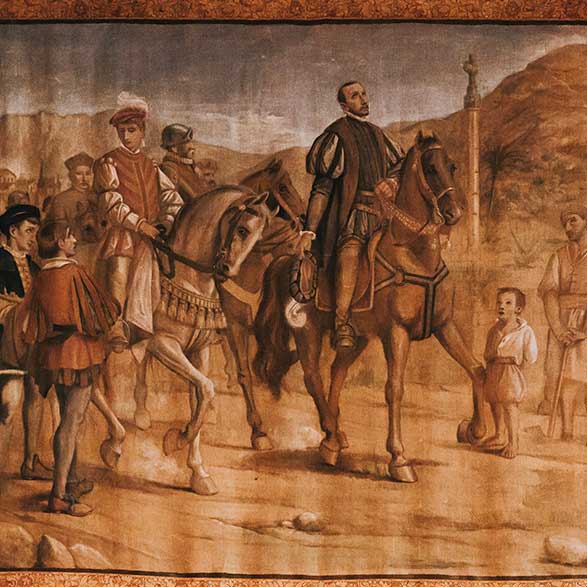 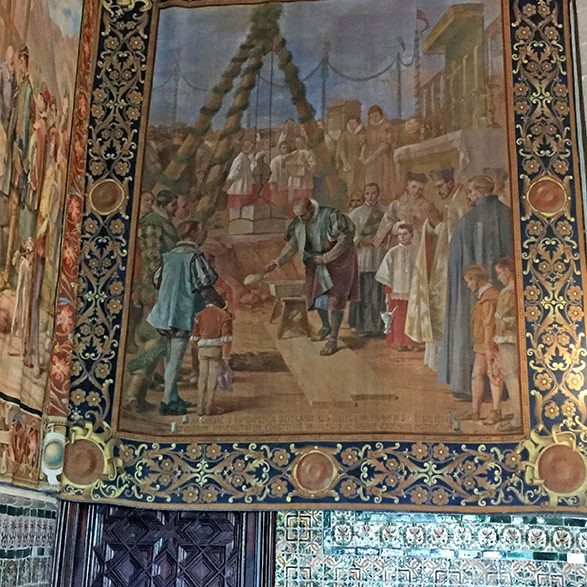 The most important project undertaken by the Duke in Gandia was the building of the College of St Sebastian, later elevated to the status of a University by papal bull from Pope Paul III, thus becoming the first Jesuit university in the world. 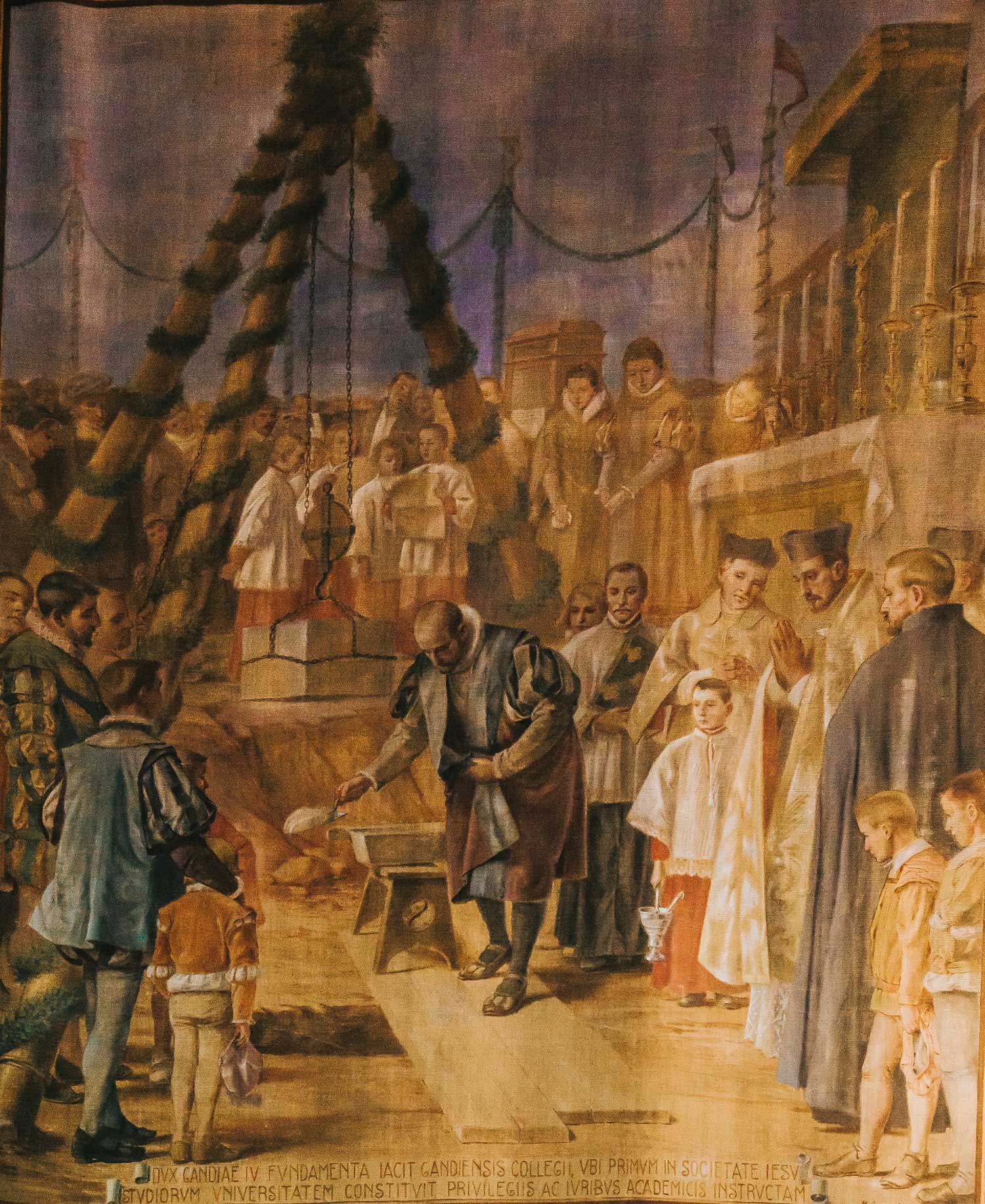 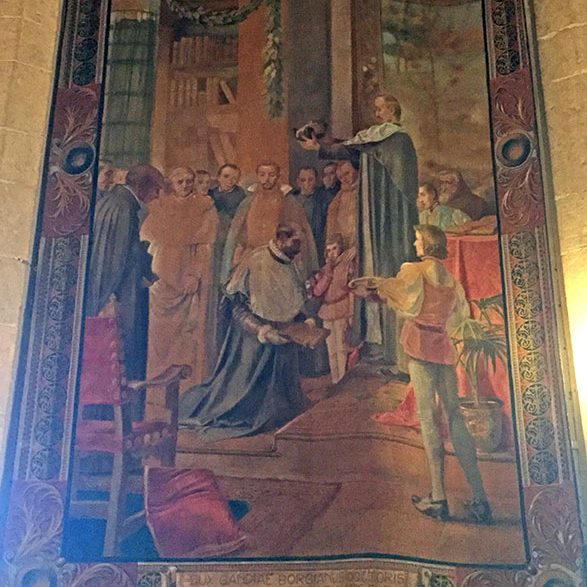 It was on 20 August 1550 when Francis Borja was awarded his doctorate degree in Theology after studying at the same university he founded. The painting seems to represent a simple, almost intimate and improvised, ceremony. 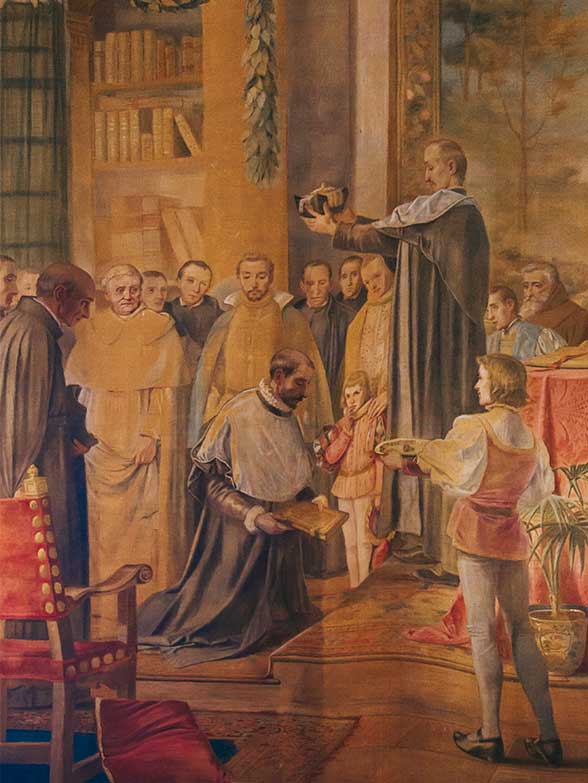 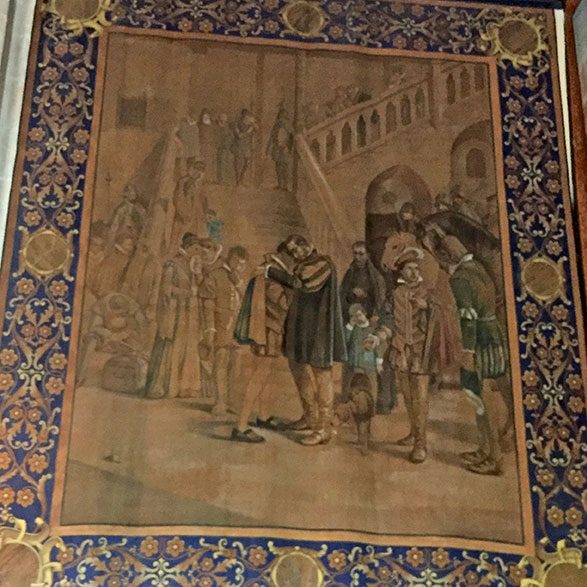 This is the same scene painted by Goya for the chapel of the Saint in the Valencia Cathedral, and in both cases the stately staircase is the scene of the events, but in the Gandia version the staircase has already been restored by the Jesuits. Here, Master Coronas focuses on the embrace between Francis and his eldest son Carlos, who will later become the 5th Duke of Gandia. 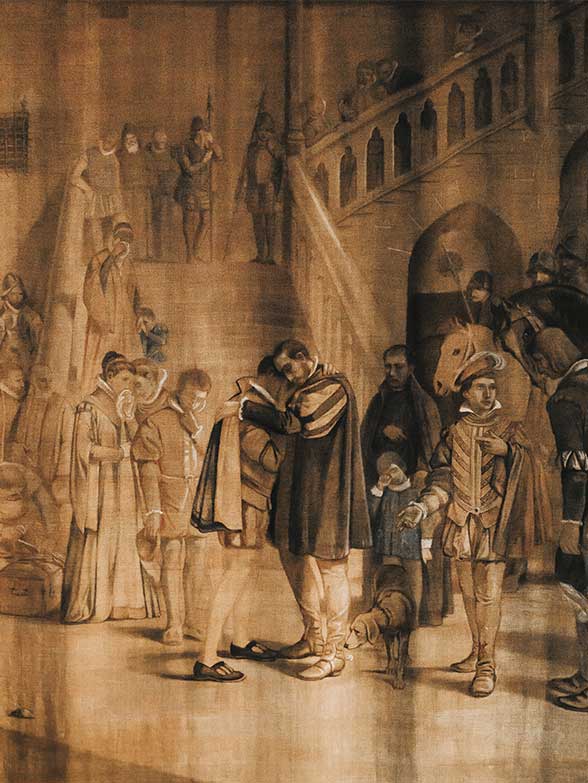 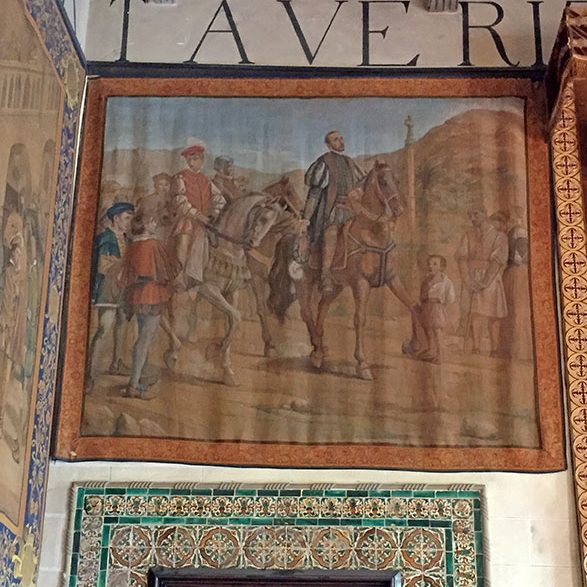 This took place on 30 August 1550. Francis Borja is accompanied by his son Juan and part of his entourage, on his way out of the city of Gandia heading to Rome, where he will begin his new stage in life as a Jesuit. Behind the horse’s head, we can see the ancient Gothic cross at the municipal boundary, which later disappeared in the 20th century. 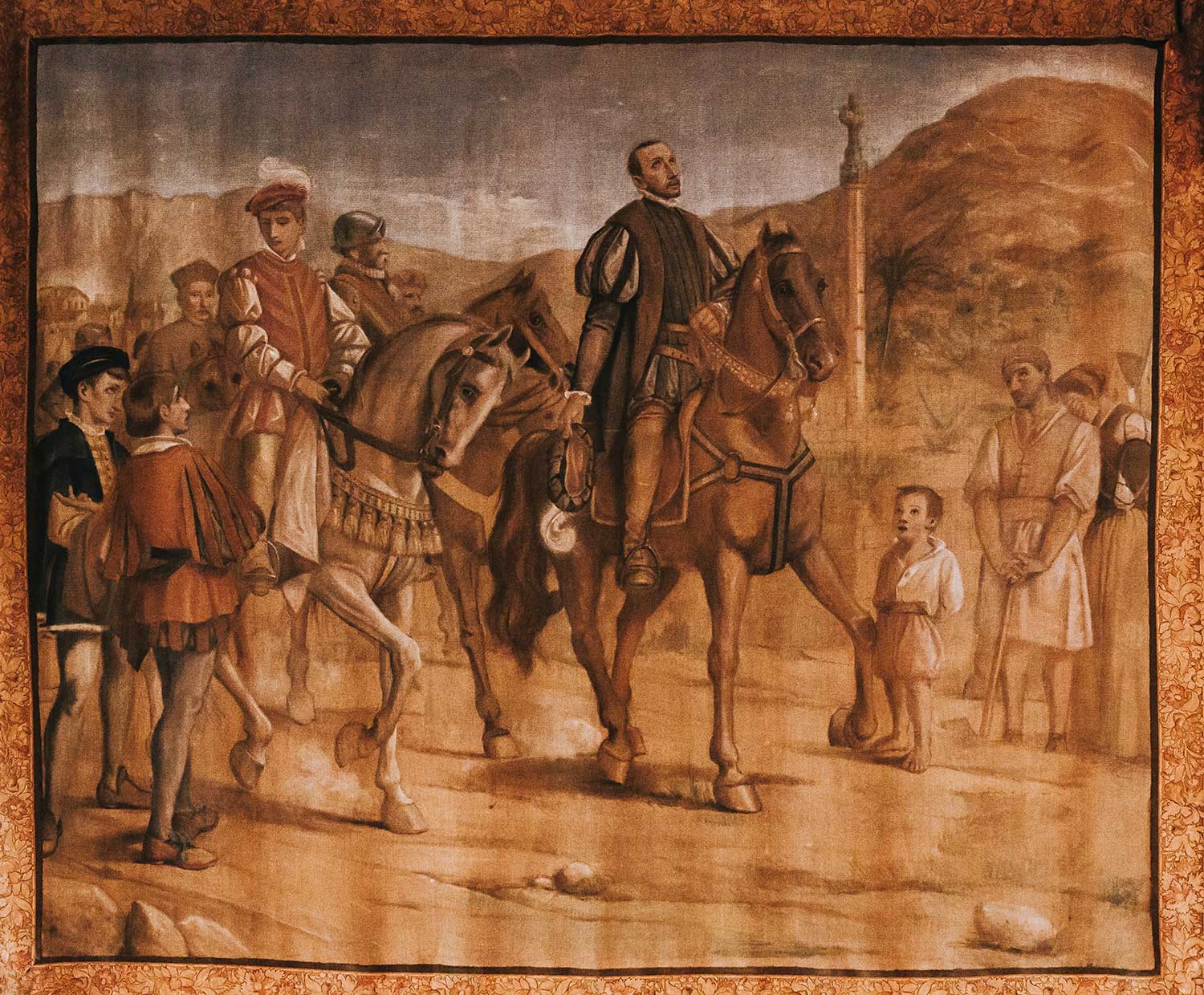